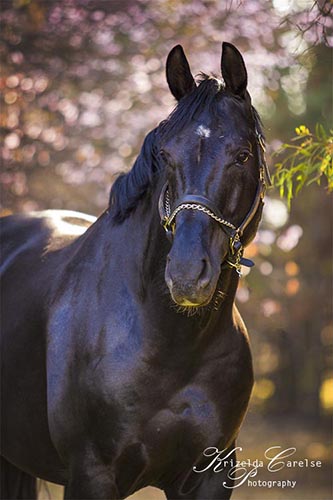 All Ster Seto is a very expressive, modern looking stallion with a very good temperament, long legs and three good paces. He has a good uphill canter and a very impressive natural jump.
He boasts a vey impressive pedigree, sporting some of the “royal” names in both Show Jumping as well as Dressage.
Inspected and Licensed stallion for SA Sport Horse Federation…

His Sire, Ferro, who is arguably the most successful licensed KWPN Dutch stallion in the international dressage sport, had numerous successes at both the World Equestrian Games and Olympic Games and was ranked #1 on the BN World Stallion Rankings for dressage for several years. Olympic Ferro excelled as a Grand Prix Show-Jumper before becoming a dressage legend and was affectionately known as the “Black Pearl” by the Dutch, being the favorite and top ranked stallion in the Netherlands. As a three-year-old he was champion of his performance test at Ermelo. His sire Ulft, is a son of the great Le Mexico, who is listed 10th on the jumping index with 142 points. Le Mexico carries Furioso xx blood, which brings value in great measure to any pedigree. 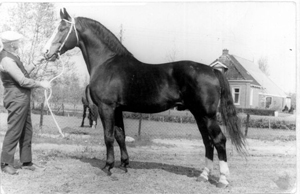 His Dam, Twix DM, is a daughter of the ever popular Royal Dance – the absolute unanimous Champion of the Oldenburger Hengsten Keuring in 1998. This exceptional Rohdiamant son was described by the German professional press as “the only and true champion, because the stallion not only is modern of type and in the rectangular model, but also has a very strong and correct leg system”. His gaits can be described as exceptional. The exceptionality of Royal Dance in type and movement is not strange when one looks at the exceptional dressage blood building of his pedigree and the unsurpassed appearance of his mother Petrouchka. During his100-day test Royal Dance was most convincing in light of the fact that he earned six times the score of 9 and two times the score of 9.5! The sire of Royal Dance, Rohdiamant is one of the most influential representatives of Rubinstein with numerous licensed sons.

Rubinstein I’s noble descent from the most successful dressage family of the world, namely that of Dodona, the dam and at the same time grandam of the multiple Olympic medalists Ahlerich 2/Dr. Reiner Klimke and Rembrandt/ Nicole Uphoff, was from the outset, one of the most popular sires that was ever stationed in Oldenburg. He was the overwhelming main premium winner in 1990. Aged three, he was the Westphalian conformation champion and thereafter won dressage horse competitions up to intermediate level in series, prior to becoming the federal vice-champion 6-year-old dressage horse, true to his absolute dressage origins in Verden in 1992. His first stallion age-class was presented for approval in 1992, with five of them gaining the coveted title straight out, including Rubirando, who was part of the premium lot and Rohdiamant, the Oldenburg approvals champion.

On Rohdiamant’s dam side is the top class Anglo-Arabian sire Inschallah AA and the priceless blood of Donnerhall, the most successful dressage horse in the world who looks back on an exemplary career. 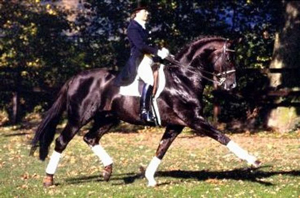 Donnerhall managed like no other sire of his generation to combine success in breeding and in sport alike. In 1986 Donnerhall was the German DLG Champion in Hanover. After many wins in Grand Prix, Grand Prix Special and freestyle classes at International level he became German champion in Mannheim with his constant rider Karin Rehbein in 1994, team world champion and individual bronze medal winner in The Hague. This was followed by another climax in 1997: Team gold and individual bronze at the European Dressage Championships in Verden. In 1998 he was once more included in the German world championship team and with Karin Rehbein was a member of the gold medal team in Rome. Donnerhall won the World Cup European League, as well as being the Oldenburg dressage stallion of the year in 1997 and 1998 respectively.