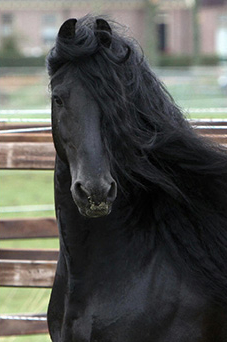 Dries 421 was pronounced the best Friesian Breeding Stallion in the World.
He had the highest index scores for his offspring of 108 for conformation and 109 for sport.With these brilliant scores, Dries has been approved on his offspring. His quality breeding is seen in his son, the two times World Champion approved stud stallion Uldrik 457.
Dries’ sire,Jasper 366 is very well known in Friesian circles for his spectacular movement. This movement together with his great temperament has clearly been carried over to this son.
Dries’ dam; Model + Pref mare Hiltsje fan Nes took top honours in the 7 year and older section at the Central Inspection in 2001.
This stunning stallion was imported from Holland in July 2012, and is owned by Pela Graça Stud situated in Douglas.
To read more about this magnificent stallion, please go to their website:
www.pelagraca.com