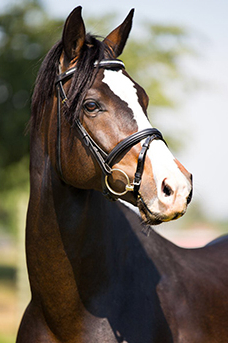 His sire, Pomme D’or was a fantastic son of the well known sire Dageraad, who was an imported KWPN stallion and sire to many of SA’s top show jumpers.
Pomme D’or was exported to Namibia to stand at stud there until his death.
Canello was a top performing Holsteiner stallion imported to SA and bred some very impressive athletes in his lifetime. He is a grandson of the world famous sire, Cor de la Bryére.

Cor de la Bryère (1968-2000), nicknamed “Corde”, is one of the most influential sires in modern warmblood breeding. He is known as the “Reserve Stallion of the Century”, second only to Landgraf I. He stood 16.2 hands
Cor de la Bryere [1] was foaled in France, and was by the Thoroughbred Rantzau, a racehorse and a producer of fantastic jumping horses. His dam, Quenotte B, also had a jumping pedigree, as she was sired by Lurioso, that was sired by the great Furioso.

The Holsteiner Verband had noticed the success that French blood had in the Oldenburg breed, which had used the stallions Furioso II and Futuro (both by Furioso) to upgrade their stock, and wished to introduce it into their own horses. The Oldenburg breeder Alwin Schockemöhle offered to part-lease the stallion Urioso (by Furioso). An inspection committee travelled to France to evaluate the horse, and happened to find Cor de la Bryere while they were there. The Verband purchased and imported the three-year-old to Schleswig Holstein, Germany, in 1971. The same year, he was the champion of his 100-day Test.

Calando I (1974-?) dark bay or brown stallion. With Karsten Huck, he was German Show Jumping Champion and team bronze medallist at the 1984 Olympics. By 1994, his offspring had earned half a million Deutsche Mark and Calando I had produced 180 States Premium daughters. Calando I is the damsire of Carthago, Canturo, Cascavelle, Lord Z and Lord Calando.