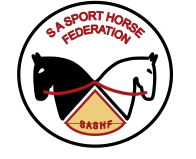 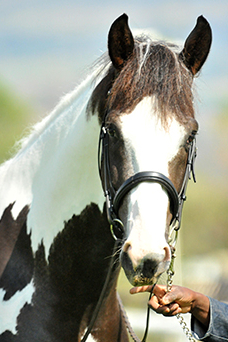 Frozen semen is available for AI. R10 000 per foal bred and comes with a LFG.
Please contact us should you have any queries.

Joepie is an imported, liver Chestnut, homozygous tobiano stallion standing 16.2hh. He is the only coloured stallion to be graded @1.30m jumps.

Joepie is an imported, liver Chestnut, homozygous tobiano stallion standing 16.2hh. He is the only coloured stallion to be graded @1.30m jumps. Previously owned by Maple Ridge Farms, Tarryn took Joepie to the top in his jumping carreer and now we have the pleasure of owning this outstanding athlete.
A pleasurable ride for every occasion, Joepie’s size and power combined with his stand-out colouring and ability makes him a desirable stallion. He definitely shows the promise to excel in any discipline in essence he is a big, sound, athletic, rideable horse with good movement, balance, and a brain. Joepie is a proven stallion with foals already competing in the jumping arena.  Joepie’s sire: James Bont is a quality Tobiano Warmblood stallion, who is the son of the well performed KWPN stallion: Unitas also possessing this old style conformation.

Joepie’s sire, James Bont a 97% full blood Gelderlander. He is a quality Tobiano (Chestnut & white) stallion, who is… 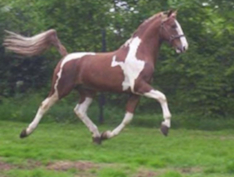 Joepie’s sire, James Bont a 97% full blood Gelderlander.
He is a quality Tobiano (Chestnut & white) stallion, who is by on of the well know performed KWPN stallions Unitas
Also possessing the old time conformation, James Bont is of sound character and is a strong yet refined gentleman in temperament. Whilst standing in Germany, James Bont showjumped very successfully at national level before being moved to Holland to stand at stud at Stal de Ronde.
James Bont has many wonderful descendants and his athleticism, elegant movement and great jumping ability are dominant factors that he passes onto his progeny. 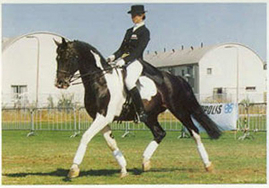 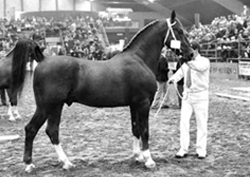 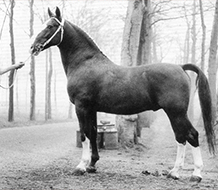 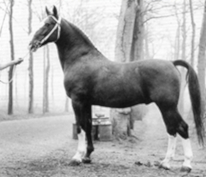 The Gelderlander
only heir of the centuries old European multi-purpose horse breeds.

Revolution
In the past century in the Netherlands two radical revolutions have taken place in the warmblood horse breeding. In both cases the Gelderlander horse has not joined in it and has remained versatile. A revolution in breeding by which the breeding aim is modified radically, leads to quality loss in other points. For example the radical transformation of the multi-purpose horse to a heavy warmblood draught horse was at cost of the riding horse qualities and the drastic change of the multi-purpose horse in a light riding horse resp. harness horse has negative consequences on the level-headed and reliable character. 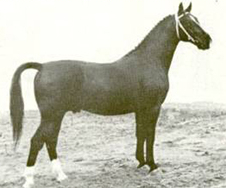 The stallion Zenith (born in 1958) was the stallion that approached best the ideal type of the Gelderlander. He obtained the predicate agriculture riding horse, a predicate for particular capability for as well the work in the agriculture as for the riding sport.
Until the end of the First World War the warmblood horse breeding in North West Europe had a comparable breeding goal from Sweden to France already centuries. In all countries a light multi-purpose warmblood horse was bred on the agricultural farms. The vast majority of the bred horses was sold however for persons transportation, the transportation of goods and for the army (cavalry and artillery). It was thus a multi-purpose warmblood horse of which the smaller weight was caused by the use outside the agriculture. Between the different breeding areas an exchange of blood lines took place regularly. Of this nobody made a problem: studbooks didn’t exist, the breeding aim was everywhere the same and the heavy work in the agriculture by all breeding mares was an excellent selection. Yet the regional differences were larger than between the European riding horse studbooks now, and so the Gelderlander was well-known in whole Europe for its good character and elegant appearance.

Frelona, in 1913 champion-mare of the Netherlands, is born in Groningen from imported Oldenburger parents of the light type. Since the foundation of Dutch horse studbooks (from 1879) the Oldenburger has had an enormous large influence on the horse breeding in The Netherlands.
After the end of the First World War in 1918 a large reduction of the armies took place. At the same time there was an expansion of the persons and cargo transportation by train and car. Therefore the demand for multi-purpose horses finished and there was a strong rise of the coldblood draught horse in the agriculture.
As a reaction on that in Oldenburg a revolution in breeding took place, by which the multi-purpose warmblood horse in short time was changed in a very heavy warmblood draught horse. The example of Oldenburg was followed in The Netherlands, Denmark and in parts of Easterly Germany and Poland. The heavy warmblood horse in the Netherlands is named Groninger horse.

Self-confident breeders in Gelderland came against this in action. They wanted maintain the multi-purpose horse. They separated self in 1925 in an independent Gelderlander Horse Studbook (GPS). The Groninger stallions remained recognized for the Gelderlander breed, but the opposite was not the case. In 1939 there came a joint studbook for the Dutch warmblood horse with in it two separate registers for the heavier and lighter type: the Studbook Groninger type (Sgrt) and the Studbook Gelderlander type (Sgldt). 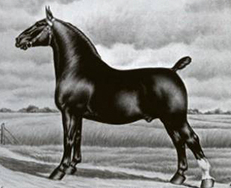 The preferent NWP-stallion Gambo (1927 – 1946) is imported from Oldenburg for the breeding of the heavy Groninger warmblood horse. No stallion in The Netherlands has had such large influence in the horse breeding. His best suns are originating from in The Netherlands bred multi-purpose mare lines.
In the North of The Netherlands three provincial studbooks for the Groninger horse were operative, that merged in 1943 in the NWP.

After the Second World War the tractor in the agriculture took over the heavy work of the horse. At the same time there was a large rise of the riding sport as recreation. Therefore the heavy warmblood horses had to become lighter. For the Groninger breed for this were imported some mares of the multi-purpose remained Holsteiner horse, from which by a Groninger sire the famous stallion Sinaeda is born. Later on Gelderlander stallions were approved for the Groninger breed.
Also many Gelderlander mares had been bred more heavily during the war years. Therefore ±1950 the multi-purpose stallions L’Invasion (France) and Normann (Holstein) were imported to make the Gelderlander horse more fit for the riding sport in the weekend. 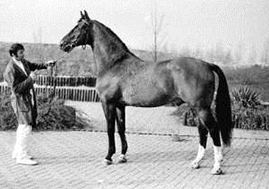 The preferent Sgldt-stallion Amor (1959 – 1990) has obtained the predicate agriculture riding horse and is declared preferent because of his excellent Gelderlander offspring. His dam was a multi-purpose Holsteiner mare. His sire Herrscher is born in Sweden from a multi-purpose mare with mainly Hanoverian blood and a classic Trakehner stallion, which yet was bred for use in the army and which at the end of the Second World War – during the famous escape ahead of the Russian tanks – achieved the heaviest harness performance in history.
The capability for the work in the agriculture during the rest of the week remained however in front.
In this same context ±1960 again a few multi-purpose stallions, as Amor (Holstein) and Eclatant (Hanover) are imported in the Netherlands to strengthen the Gelderlander breed.

Since 1960 much Dutch horse breeders and riders – in imitation of the foreign studbooks – wanted change radically the multi-purpose Gelderlander horse in a specialized riding horse so fast possible. Large numbers of stallions with whole other blood then the European multi-purpose warmblood horses have been used for that. The Gelderlander breeders refused acceptance of these bloodlines in their breed, for these had been bred for a whole other breeding aim. Moreover the horses with the new bloodlines were no longer subjected to the heavy selection in the agriculture. Therefore for such stallions and their offspring was established an apart Sportregister and only a horse with minimally 75% Gelderlander blood could be registered in the original studbook.

Because one expected that the as riding horse bred horses with other blood would be better sport horses than the multi-purpose agriculture horses, the Sportregister increased enormously. With the help of Hackney-blood at the same time specialized show horses were bred for the harness horse classes in the show ring. In the past already Hackney-blood was promoted strongly by important persons outside the agriculture, who were supporters of a light horse for the buggy. The farmers however didn’t like Hackney-blood in their horses and so in the Gelderlander breed nothing of it was remained.

Basic horse / Gelderlander horse
Self-confident breeders in Gelderland came in action against this. They wanted to maintain the versatile multi-purpose horse. At the same time from the Dutch Rare Breeds Survival Foundation was founded an independent studbook for the Groninger horse, of which the KWPN had disapproved already the last remained stallion. The Gelderlander breeders obtained in 1980 again an own breeding direction within the KWPN, but this no longer might be named “Gelderlander horse” but “basic horse”. The name “Gelderlander horse” could depend on many sympathy yet, especially on the side of the old breeders, and “basic horse” means that this is not the real breeding goal. A number of years later on by an adaptation of the rules the name “Gelderlander horse” is rehabilitated. Then already many sympathizers of the versatile horse had been changed on the breeding of riding horses or harness horses. 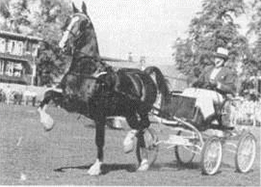 The preferent Sgldt-stallion Oregon (1950 – 1967) is stemmed from the normal versatile breeding and all his foals are registered as Gelderlander. Oregon himself had excellent harness horse movements and also passed this on to his offspring. By too one-sided use of Oregon-blood in the harness horse breeding one had to use other races because of inbreeding. Now there is not a single harness horse stallion without Hackney- or Saddlebred-blood.
Yet – in proportion to the number of foals that annually is born – the share Gelderlander blood in the top sport is striking large.
Annually much more harness horses with Hackney-blood are born than Gelderlanders. In spite of that no harness horse with Hackney-blood excelled ever in the (international) dressage or jumping sport.
In the driving sport the Gelderlanders provided exceedingly striking performances always. The best-known horse all over the world in the driving sport is Paledo of IJsbrand Chardon. There are now harness horses (with besides many Gelderlander-blood also Hackney-blood) that achieve well in the international driving sport. These are not Gelderlanders, but less succeeded harness horses with economic movements instead of much knee-action. Hackney-influence in the character is compensated on the this level in the sport by the professional quality of the drivers and the intensive training. 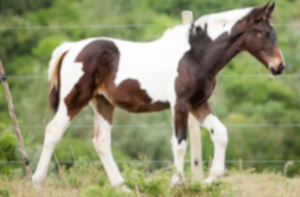 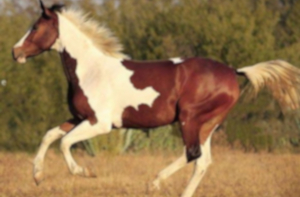 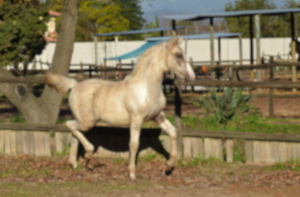 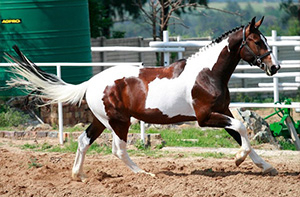