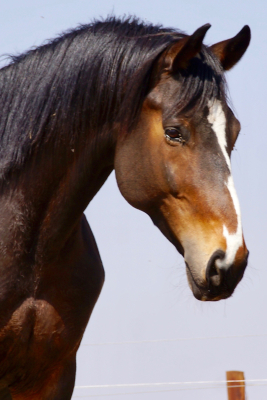 Junior is a gorgeous bay tobiano stallion by our very own Joepie.

Junior is a gorgeous bay tobiano stallion by our very own Joepie.

He is bred with fantastic dressage and show jumping lines on both sides of his pedigree and has himself competed 1.20m thus far.

His Dam Touché competed successfully in higher level showjumping before retiring to stud.

His dam Sire Thaddaeus was an dark bay imported Hannoverian Stallion born in 1985.

He was Licensed and Performance Tested in Adelheidsdorf, Germany in 1988, where he was placed 6th out of 56 privately owned stallions, with 123,91 points overall, qualifying him as a Leistungsklasse I breeding stallion.

His pedigree boasts top dressage lines, and today his progeny’s ability, performance and, above all, temperament, are a testament to his pedigree and have been proven several times over not only as dressage horses but also as good all-rounders in eventing, showing and show-jumping.

His sire Joepie is our foundation stallion and himself competed opens under Megan Uren Zofka. He also sired some top performing progeny whom are competing successfully in higher level showjumping and eventing and even dressage.