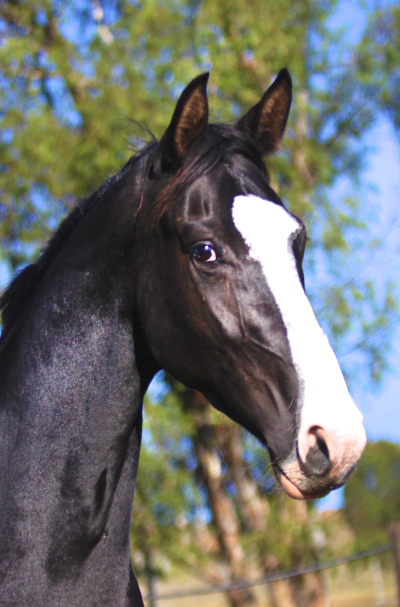 Amidala is a Warmblood cross, SA Sport Horse mare, standing an impressive 16hh. She is a beautifully marked black tobiano mare born 06/02/2008.
Her Sire is the legendary Warmblood stallion, Auf Wiedersehn owned by Southcross Stud and her dam is a pinto mare called Mandy, also from Southcross stud. She has the sweetest personality and if she wasn’t so huge, she would jump on your lap like a puppy!! Best temperament!!!

Auf Wiedersehn a SAWarmblood standing at 16.3H and born in 2000 is the result of a fusion of two important imported Hanoverian stallions, Wendesi and Attila.
Progeny of both these stallion, now sadly both deceased, have made their mark in the disciplines of showjumping, dressage, showing and eventing.
Wendesi has produced a number of A Grades such as Bonus and Boerde Onduno as well as the licenced stallion, Phoenix Laghetto, who was sold and exported to Europe.
Attila, approved in Hanover, himself successful at the highest level, sired many fantastic horses, including Adagio, Allergo, Alsace and Angus Og.Auf Wiedersehn’s half sister, is the very successful, Hakahana Raquel, who was the ranked no 2 Horse in the 2006 in SA before being sold and exported to Belgium.
Capriole sired numerous A Grade horses including Quizzy Kid and Orange Man. Daylight Robbery xx sired A Grade horses such as Blind Robber, Desma Drummer, Professional and My Memory ridden by Tony Lewis.

Wendesi is an imported Hann stallion by Wendekreis, this stallion has a son called Phoenix La Ghetto who has been exported from South Africa and is competing in Europe on the circuit, Phoenix is a beautiful stallion who is currently competing in Europe and jumping up the grades. Wendesi has sired many top class horses like Adult Dressage team horse Southcross Walker Bay and Claire Dicey. Wendekreis is regarded as one of the most influential stllions of the past few decades and is well known as a producer of riding horses with excellent trainability. He was a noted producer of sport horses and sired over 50 approved stallions and 400 Main Studbook Mares in Germany including Werther, the 1992 Hanoverian “Stallion of the Year”. 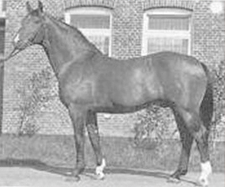