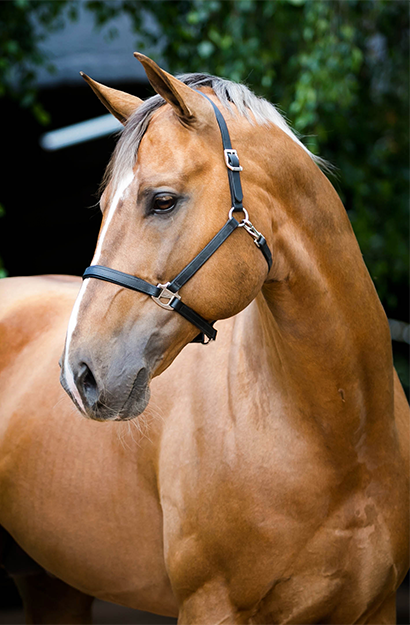 Stud fees are R10 000 per mare. LFG.
A discount will be given for two or more mares covered.
AI only, no live coverings done.
Please contact us should you have any queries, or to request a breeding contract.

Treliver D’Artagnan (also known as Douglas) was imported as a foal from the UK from his breeder, Gill at Treliver Stud.

Treliver D’Artagnan (also known as Douglas) was imported as a foal from the UK from his breeder, Gill at Treliver Stud.
He was sired by Treliver Decanter, a British Warmblood, who is successfully competing in dressage at the Prix St George level in the United Kingdom.
Decanter has been awarded premium status by the British warmblood society.
He is also a licensed son the world renowned Demaggio who is a Don Primero son.

Decanter is producing elegant stock with big paces and excellent temperaments. Feedback from mare owners is indicating they are very easy to handle and are proving a delight to back and ride on. There are older youngstock successfully competing in Eventing and Dressage.

This is a line of world class performance tested licensed stallions whose performance results in itself speak for themselves.
Douglas has inherited his father’s handsome features, size, good conformation, lovely movement, calm temperament and eye-catching colour.
His dam line also boasts top dressage sires to ad to the royal blood of his sires linage.

He is currently competing in dressage Elementary level and has been placed a number of times.
Please contact me if you would like to discuss using this gorgeous boy on one of your mares.

Decanter has three fabulous paces and an excellent technique jumping, added to this a wonderful temperament and superb colour make him a sire not to miss. He is proving popular overseas and he has a son in Holland who has been retained for breeding and a stallion son in South Africa. His first mares are booked for the USA this year.

His great grandsire World Cup I is recognised as an important dressage sire with numerous offspring competing at International level. His great grand sire on his damline, Graditz, is the sire of the famous International dressage horse Gigilo and also produced several stallion sons. Graditz’s sire Grande was a famous show jumping sire who produced numerous stallion sons and also had a number of international show jumping and dressage progeny. Grande produced 33 approved sons, 34 states premium mares and sent three of his showjumping progeny to the Olympic Games.

Decanter started competing in 2008 and has competed at the BD Nationals and Regionals since then. He now competes successfully at Grand Prix.